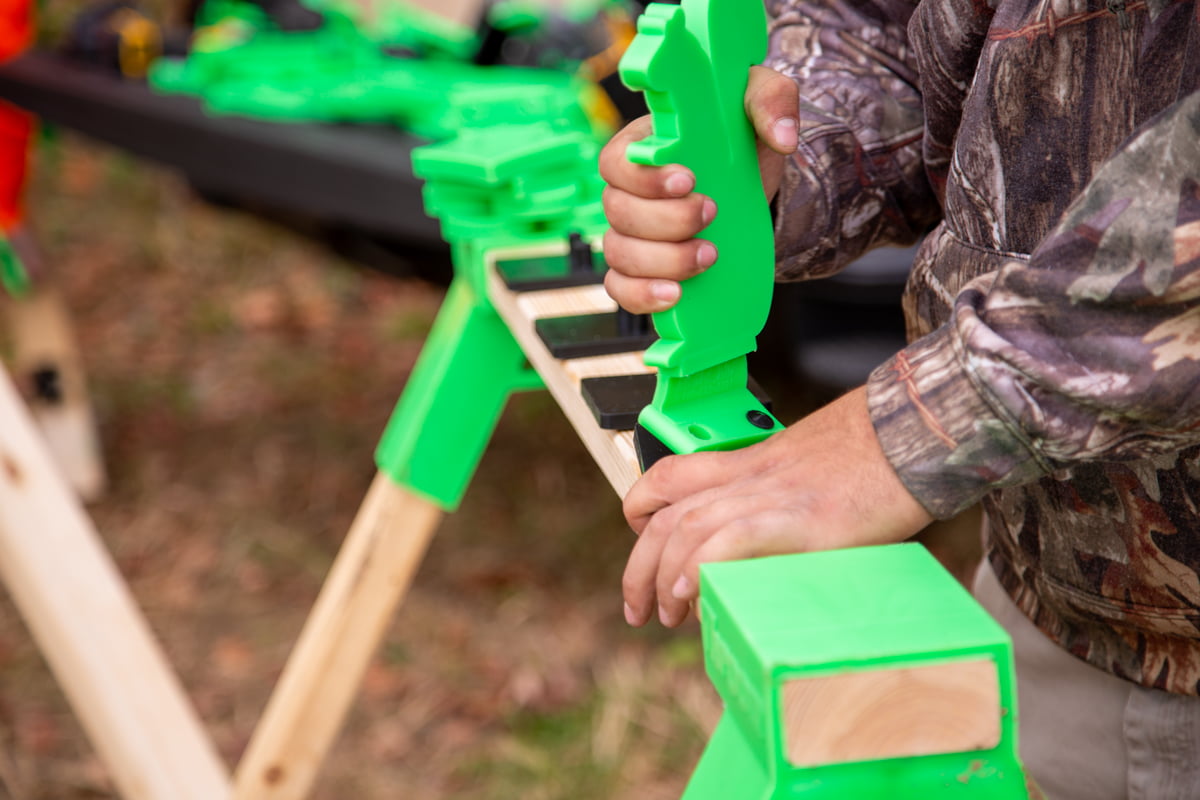 As with anything new and different, you will probably need some direction and explanation concerning the use of these targets. Keep in mind that these targets aren’t meant to register a bull’s-eye in the “ten-ring;” the point is, these targets react to your hits. THROOM™ Targets formerly, NEWBOLD Targets are designed to provide shooters with a safer-than-steel and fun-to-shoot target alternative, one that allows bullets to pass completely through the target without ricochet or lead-splatter thrown back toward the shooter or spectators. The bright fluorescent green THROOM target color stands out against virtually any berm or backstop. Our Snap-Back!…Fall-Down / Stay-Down!…and…Flip-Around! versions appeal to all target shooters—new and old, beginner and expert. Here’s how you shoot and mount them:

Adequate Back-Stops, Earth Berms, and/or a Bullet Trap are absolutely required to insure safety at all times. THROOM targets do not stop bullets, they are not bulletproof.  Bullets pass through THROOM targets and the bullets keep going into your backstop or berm.
Don’t shoot .22 shorts, B-Bs , air gun pellets or slingshot projectiles because they will bounce back to the firing line, shooter and bystanders. Use any caliber handgun ammo from .22 Throo .45 with a velocity of 750 feet per second or greater.
Mount THROOM™ Targets on soft stands made of softwood. We do not recommend that you mount these targets on steel supports, with steel bolts, hardwoods, rocks, or any other hard objects.
Please wear proper Eyewear and Hearing Protection at all times.

We recommend that you shoot FMJ or lead roundnose ammo. Hollow-points can be used but will cookie-cut the material.

THROOM™’s BOUNCEBACK™ Series™ Targets — can be mounted on a soft wood surface, such as pine-board 2X4s or 2X3s… so they’ll snap backwards with each hit (even double-taps) and then flip back to the upright position. One-piece BOUNCEBACK™ Series targets feature a flexible hinge at the base (made of the same THROOM™ material as the target). They don’t bend all the way back to a horizontal position. For example: The target moves, flexing backwards when hit with .22 Long-Rifle high-velocity rounds, but moves more with a .38 and more yet with .45 caliber rounds. The best thing about the BOUNCEBACK™ Series is that there is no need to go down-range to reset this target.

Use THROOM™ (Self-Healing) Nuts and Bolts — instead of steel bolts — to secure BOUNCEBACK™ Series™ Targets to soft wood surfaces. These help to eliminate bullet-splatter and ricochet. Two THROOM™ bolts with nuts are required per target. When mounting them on the wood stand, drill two 9/16″ holes per target. Place the THROOM™ bolts in the holes, press the nuts onto the bolts and tighten the nuts just enough to leave them a little loose. When they are a little loose, the target will flip back and forth more with each hit.

Use THROOM™ Support Bases — for larger Round targets, Square targets and Bowling Pin target shooting, where the idea is to “Knock ‘em down so they Stay Down,” BOUNCEBACK™ Series™ targets “snap-on” to these support bases easily. When they’re shot with a solid hit, the target, along with the attached support base, falls over or falls completely off a post or stand. These Support Bases (made of the same material as the targets) also help to steady any BOUNCEBACK™ Series™ Target on an uneven surface and provide more stability for the targets when you’re shooting outdoors in breezy conditions. You can also use the screws provided with the BounceBack Bases to attach the bases directly to your soft wood stand and snap the targets into the Bases for snap back action.

THROOM™ KNOCKDOWN™ Reactive Target Targets — When hit, KNOCKDOWN Targets fall over backwards and stay down until reset, either with a simple pull-string at up to 50-feet away, or by going down-range and manually resetting them. KNOCKDOWN targets rotate, front-to-back, on the Pivot Base. The Pivot Base (sold separately) is made of self-healing THROOM™, so the bullets pass through the base too. The Pivot Base is secured to the wood target stand with THROOM™ Nuts and Bolts (just like the “BOUNCEBACK™ Series” targets). Some shooters like to mount them upside-down because when you hit them this way, they flip back — like our HANGTUFF targets — except that the flipping motion is straight back and it stops moving in about a second, ready for the next shot. KnockDown Bases can be attached with our THROOM Nuts and Bolts or four wood screws which are provided with each base purchase.

Replaceable KNOCKDOWN targets are, in-the-long-run, considerably less expensive than BOUNCEBACK™ Series targets because they are not as thick — 3/8″ vs. 5/8″ — and the Pivot Base remains usable (i.e., it does not have to be replaced as often as the target).

THROOM™’s Pepper Poppers — are essentially KNOCKDOWN-like targets, but on a larger scale (42″ and 22″ high) — they knock down when hit. The 42″ and 22″ Popper must be reset manually reset. See photos and descriptions of the Popper Targets toward the bottom of the Order Page. THROOM™’s HANGTUFF Targets — attach easily to the frontside of a 2X4 with (2) wood screws (included). When hit, these targets move dramatically in all directions! The 2, 3 and 4-inch versions are best used with .22 caliber rounds; the 6 and 8-inch Squares and Rounds are designed for and move more violently when hit with .38s and 45s. You’ll find that when you hit a HANGTUFF in the center, it will flip straight back. Hit it low in the center and it flips straight back — faster. Hit it left and you’ll see a left twist, etc. These targets also move reasonably well when hit with rifle fire, especially in the 2 and 3-inch sizes with calibers like .22 Hornet and .223s, for example.